“Come on, I’ll paint our colours for you on the wide walls of the house …” That’s a line from a song by Gisela Berndt, and that’s exactly what happens when this singer-songwriter from Cologne opens her lyrical paintbox for us. Gisela Berndt paints – with her lyrics and with her voice. She creates life-like scenes, embarks on complex inner journeys in search of the truth, and allows memories to take shape; and this is all done with a light hand, as though she were sketching. This artist’s lyrical and tonal paintings are never loud and striking. Instead, her stories are more like a glimmering watercolour, with nuances, overlapping surfaces, and a shimmering interplay of light and shadow. Just as the painter uses water and colour to bring their work to life on a canvas, Gisela Berndt uses entrancingly clear language to create the greatest complexity in her lyrics – they are words which sparkle on her voice. We are the canvas, allowing ourselves to be captivated by this voice which conveys
a lightness and sensual depth at the same time.

Gisela Berndt is a woman who is experienced in life and who has something to say. Her feet are planted firmly in the here and now, but her head is free in the clouds. The best conditions then for an artist …

She approached composition through her texts and poems – written in German – which she wanted to give a further dimension by adding tonal and rhythmic counterparts. The music was developed in collaboration with the pianist Gero Koerner. Together, they tailored a perfectly fitting sound for each of her stories – one which creates an unmistakable mood for each of her songs. Musically, the ten pieces on the album Nach Norden (To the North) move between swing, latin, jazz and blues. And each mood in her lyrics is modulated and accentuated by the rhythm and melody.

With Gero Koerner (p), Werner Lauscher (b) and Benedikt Hesse (dr), Gisela Berndt can rely on a band which sensitively yet self-confidently follows her strong artistic personality as a perfectly harmonised ensemble.

Let’s go with her then – Nach Norden – to the north. “When the clouds build roofs and when wind paints the houses…” 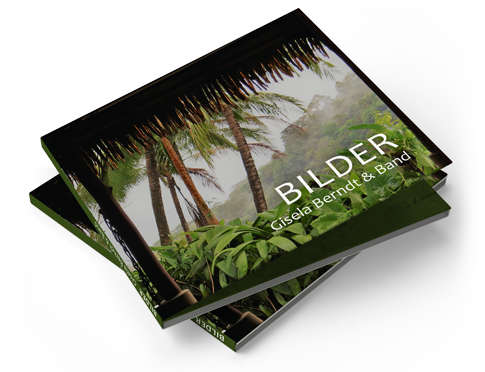